From building roads to learning the ancient techniques of bamboo handicraft

Construction worker Mauricio Antonio Núñez lost his job in 2018 because he defended the government during the violence associated with the failed coup.

Journalist Jorge Capelán visited  him in his workshop south of Managua to find out about his new vocation as a bamboo craftsperson thanks to the support of the MEFCCA*, the government ministry for the social economy. In addition Mauricio is a member of a co-operative set up to grow and sell bamboo.

“We’ve been working with bamboo for three years now,” he explains. “I was totally ignorant about bamboo, and I had never even thought I could do drawings or art.” he adds. The progress Mauricio has made was rewarded in November 2020 when he won third place and a prize of 5,000 córdobas (£100) in a handicraft contest organised by MEFCCA.

When MEFCCA announced in 2018 that they were going to organise a bamboo training project in the area where Mauricio lives he signed up ‘out of curiosity’.  He immediately felt a love for working with bamboo and has since done MEFCCA courses in making toys, furniture, masks, chandeliers, walking sticks as well as how to do lamination and run a business.

Mauricio went on to explain what the training has meant to him: “I never imagined I could do this. I think the only thing that was missing was a little bit of discovery and some training and encouragement. I’m still learning because I’m new, I’m not like people from other places who already have ‘that gene’ [of craftsmanship that has been passed down through generations].”

The courses are taught by Nicaraguan, Central American, and also Chinese-Taiwanese teachers, a country with a long tradition of using bamboo, not only for handicraft, but also for large constructions.

At the beginning, Mauricio received only training but when his commitment became clear, he received a loan from MEFCCA to buy raw materials and tools.

“From there I started to work a little more, to have clients… If you look here you will see that I have almost nothing, because they call me and ask me ‘look, can you do such and such a thing’ and then I make it.” “Everything associated with working with bamboo requires a wonderful technique’, he stresses, “it may look easy but it isn’t.”

The first piece he sold was a mask. “People loved it,” he says. “Now I have clients waiting for orders, but I tell them that they have to be patient because you have to make sure that what you are delivering is [a good product]; bamboo is very delicate.” 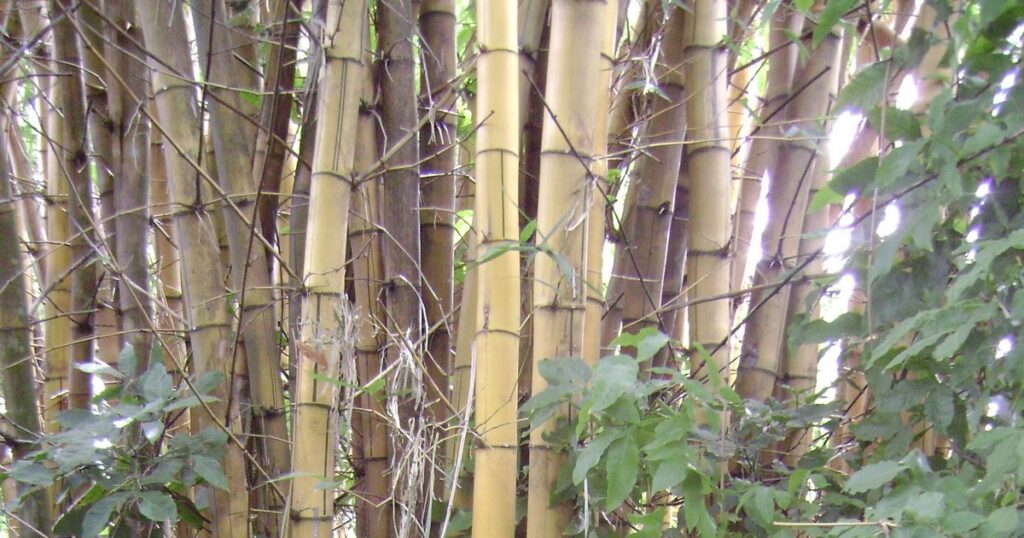 To ensure that it is well cured the bamboo must be cut according to natural ancestral techniques during  a particular phase of the moon and then dried evenly in the sun. If this doesn’t happen correctly there is a risk that termites will start eating it so ‘even if the piece looks beautiful’ it will be a bad product.

Bamboo is grown in the Central Pacific region of  northern Nicaragua. Thanks to the support of China-Taiwan new varieties have been introduced, for example, very thin varieties and thicker ones used in building construction.

Mauricio acknowledges how grateful he is to MEFCCA for the support they have provided so that he can dedicate himself to bamboo: ‘If it weren’t for MEFCCA  I wouldn’t be doing this right now, who knows how I would be… ‘

This is ongoing support not just in the form of technical training and loans but also on how to set up and run a business. ‘For example tomorrow they have invited us to a course on how to design an eye-catching logo.’ he says.

Mauricio is also member of a ten person co-operative that currently buys bamboo from other places such as Matagalpa, but they have also started to grow it in Managua to use as raw material and to sell plants to other people.

* Over 80% of the Nicaraguan workforce is employed in the social economy which creates 60% of disposable income. For this reason the Ministry of Family, Communal, Cooperative and Associative Economy (MEFCCA) is one of the country’s key ministries. Whole sectors of the economy are owned and controlled by this sector ranging from transport to food production to retail.

It is responsible for a large variety of startups such family owned shops, peasant co-operatives, and women’s organisations. MEFCCA supports these enterprises with training, funding and promotion.

The logic of MEFCCA is not based on reproducing capital for its own sake, but rather to address the needs of the self-employed workers, their families, communities and society as a whole.