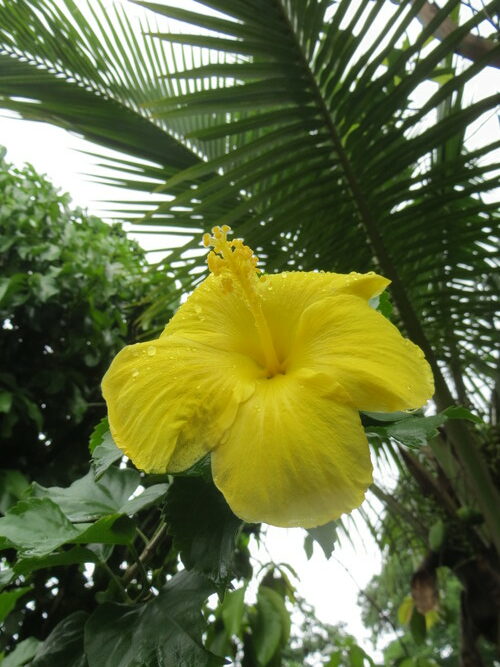 From bullets to plants,the life and struggles of Don Mercedes

Yorlis Luna describes the story of Don Mercedes Baltodano, a war veteran whose life is a reflection of strength, creativity and talent of Nicaraguans who work in the social economy.

Nicaragua’s unique social economy goes hand in hand with the history and life of the people of Nicaragua, the struggle for survival, and the search for a better world.

Don Mercedes  lost his foot in the Contra war [of the 1980s] but nothing could take away his courage to move forward: after being demobilised, he became a security guard at a plant nursery, and now thanks to the land he has been given and restored, his family have their own house and run a small business selling plants.

His vision, tireless work and motivation are an example of how the social economy is advancing in our Nicaragua.

I met Don Mercedes among the bright colours of different flowers that he grows, the smell of medicinal plants from his nursery, and yellow and black butterflies fluttering all around. 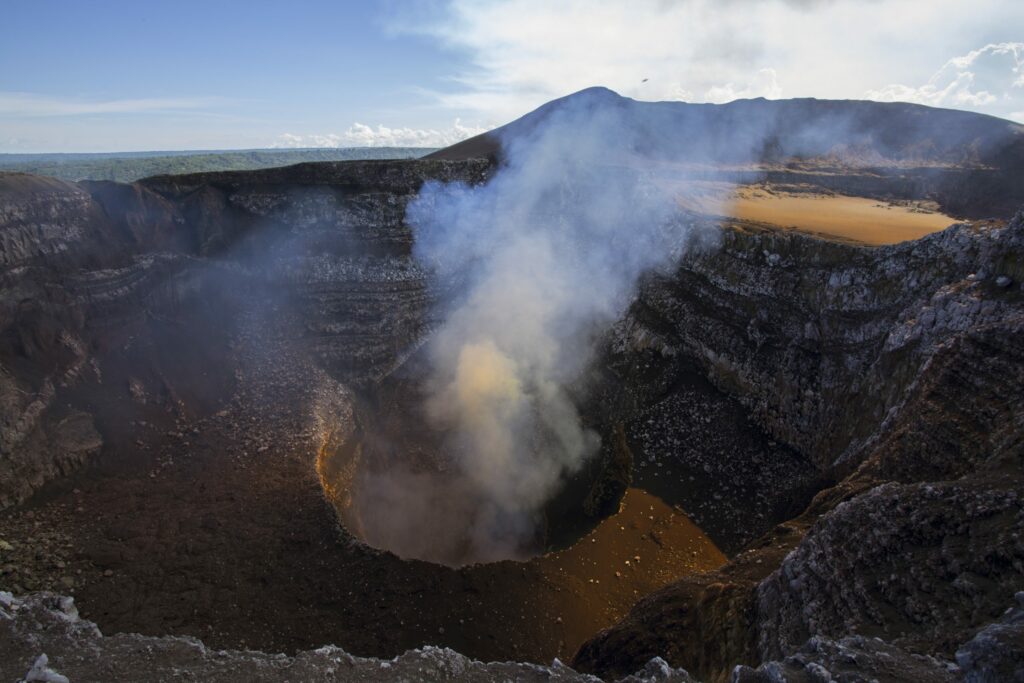 On his land there is a lookout with a fantastic view of the Masaya volcano and the entire fourth region of Nicaragua. Along the path Don Mercedes has created twenty arches of flowers. Every detail of the farm, plant nursery and viewpoint has been made with a lot of creativity, work, dedication and love.

At first, Don Mercedes seems surly; he almost doesn’t speak, but this all changes when he starts talking about plants and his face lights up. He explains:  “I sell the plants at affordable, solidarity prices, so that everyone can have them”.

Don Mercedes works with his wife and two children. After I had made several visits, Don Mercedes wanted to tell me more of his story. As he does so, he stokes a fire to keep away the mosquitoes, fills bags of earth and plants coffee seedlings.

YL: Don Mercedes, when did you join the Sandinista front (FSLN)?

“My whole family is Sandinista; I have another brother who also lost his foot. In my family alone there are four war wounded.  I joined the struggle and the FSLN when I was 12 years old. In my community in 1978 I participated in the war of liberation, then after the triumph of the Sandinista Revolution [in 1979] I joined a training school called Hilario Sanchez Vazquez. 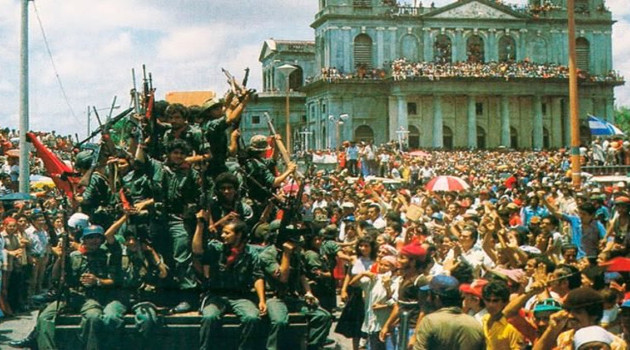 In 1984 I volunteered for military service and was part of an irregular combat battalion called BLI German Pomades. I participated in operations in Honduras, I was unharmed there but then in a ten minute combat in El Toro hill they hit me and destroyed my foot. My comrades walked with me for several days and my foot became gangrenous and I was hospitalised for three months. …

….and then in 2018 I defended the Revolution again from the war [the opposition protesters calling for the overthrow of the Sandinista government] they launched on us.

I was against all the barbaric acts they committed; I was filled with anger when they began to kill policemen. They killed the president of the retired army in the area and his son who was found dead a few days later in a rubbish dump. 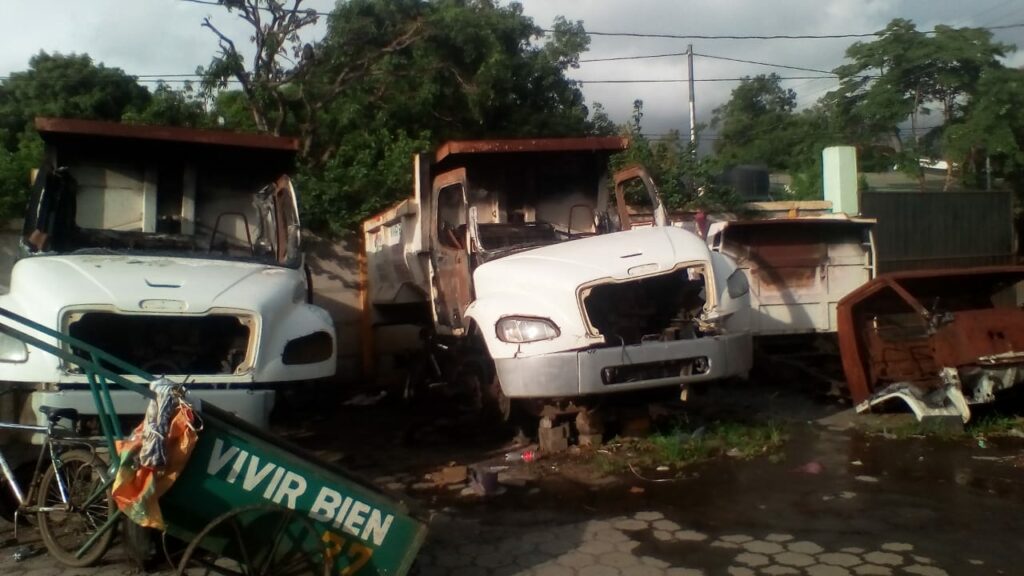 Masaya, 2018, vehicles belonging to the municipality burn out and looted by opposition protestors

If they do it again, we will defend ourselves because  we will not allow them to take away the peace we have gained at such a cost.”

“Look, I am not ashamed to say that I was an illiterate soldier so the army taught me to read and write. When the Sandinistas lost the 1990 elections we war veterans were abandoned, they froze our pensions, we had no medical attention, and I had to work as a security guard.

Look at how they help the people with productive packages that include  pigs, chickens, cows, houses, roofing materials…this has never happened  before…”

YL: How did you come up with the idea for this beautiful nursery?

“The land was granted to us by the state, the person who lived here before didn’t like the place, he told me it was useless and I told him, no man, don’t curse the land, the land is blessed. There are people who didn’t see the beauty of this place, but I did.

We started with ten plants, then a hundred, and so we have expanded little by little, I didn’t know things about terraces, seedbeds, but we have learned.

YL: What would you say to people outside the country?

“What they [the opposition] say about Nicaragua is not true. For example vaccines have been politicised and they are telling people in the neighbourhoods not to get vaccinated because the Comandante [Daniel Ortega] is trying to kill people ..so many lies…  the Commandante is concerned about the people, about the producers, looking for ways to reduce poverty, from my perspective we are doing well.”

In addition to having the beautiful nursery and viewpoint, Don Mercedes is making progress in agroecological production. “I am concerned about healthy production, reducing chemicals,… if we apply insecticides we are damaging the environment, we do not apply chemicals here because it damages the land.

We make sure the land is planted  so that it does not erode and become a corpse. …it happens to the land as it happens to us when we go to the beach and take off our clothes, we get burned…that’s how it is with the land, and it has to be covered too. The land has to be worked so that we and the land can prosper.”

The legacy of Paolo Freire: popular education in Nicaragua

The social economy through the eyes of Doña Xiomara, the market seller