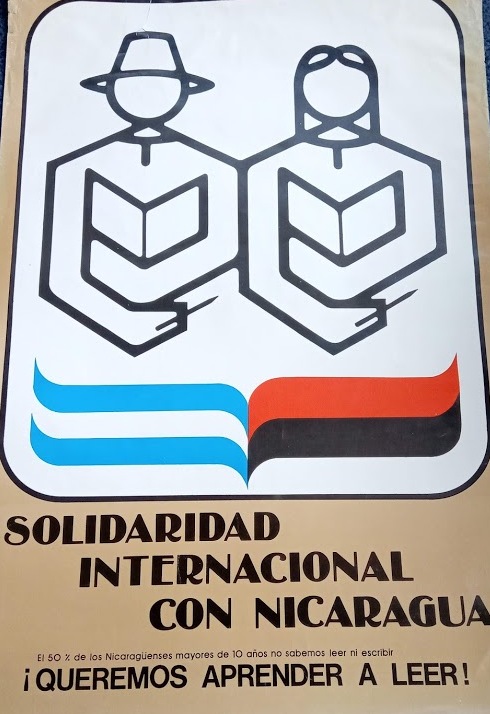 This month marks forty years since the end of a six month literacy crusade during which over 400,000 Nicaraguans learnt basic reading and writing skills for the first time.

When the Sandinistas came to power in 1979 their key priority was building ‘a new model of society based on equality, well being, solidarity and social justice’.

Over 60,000 young people and 30,000 adults mostly from urban areas received basic training in teaching literary before being assigned to rural communities to spend five months living and working with families and teaching them to read and write.

Thousands of others provided logistical support, bringing total numbers involved in the campaign to one fifth of the population. Women made up 60% of brigadistas and 50% of literacy learners.

An extract from a campesina to the mother of an urban brigadista sums up the essence of the literacy crusade:

I am no longer ignorant, I know how to read. And your son isn’t ignorant any more either. Now he knows how we live, what we eat, how we work, and he knows life in the mountains. Your son has learned to read from our book.

As a result of the campaign, illiteracy was reduced from 56% to 12%. Nicaragua was awarded the UNESCO Nadezhda K. Krupskaya award in September 1980 in recognition of this success. In 1981 additional literacy campaigns were carried out on Nicaragua’s Caribbean coast in the local languages: Miskito, Sumo and Creole English.

These innovative and highly successful literacy initiatives not only dramatically reduced illiteracy in Nicaragua but also inspired and informed other literacy projects around the world.

What did the Nicaragua Solidarity Campaign contribute?

NSC, set up in 1978, organised a UK campaign to support education in Nicaragua including the literacy crusade.

This included publishing an 80 page booklet called ‘The Loss of Fear,’ building alliances with the National Union of Teachers (now the National Education Union), and raising £5,000 (the equivalent of £21,000 in 2020) towards literacy crusade costs.

NSC was also instrumental in gathering the support of 133 MPs, MEPs and members of the House of Lords for the nomination of the Literacy Crusade and its director Father Fernando Cardenal for 1981 Nobel Peace Prize.

A 1980 London conference on education in Nicaragua attracted 80 people many of whom went on to became long-term NSC members and supporters.