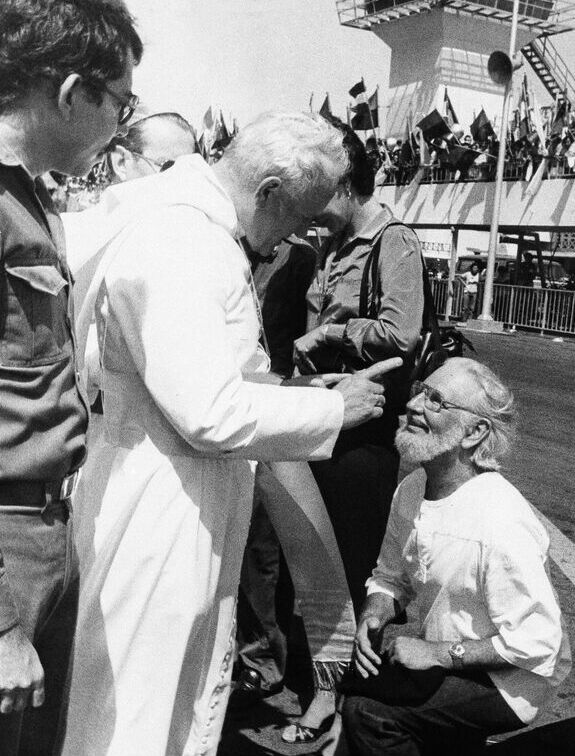 ‘We come from the stars, and to them we shall return.’ Ernesto Cardenal

Three days of national mourning have been declared by the Nicaraguan government to mark the death at the age of 95 of one of Latin America’s best known poets.

Born to a wealthy Nicaraguan family, Father Cardenal became a prominent intellectual voice of the Sandinista revolution and a proponent of liberation theology, a Christian movement rooted in Marxist principles and committed to common cause with the impoverished through the gospel of liberation.

He was appointed Nicaragua’s first Minister of Culture after the Sandinistas overthrew the dictator Anastasio Somoza Debayle in 1979.

Before a 1983 visit to Nicaragua in 1983, the Pope demanded that Father Cardenal and four other priests resign their government positions. The Sandinista government refused to replace them, but the visit went ahead.

However, as the Pope he walked along a line of dignitaries Father Cardenal knelt down to kiss the pope’s ring. The Pope withdrew his hand and wagged his finger at him in disapproval.

In 1984 Father Cardenal was expelled from the priesthood to which he responded:

Christ led me to Marx

I don’t think the pope understands Marxism. For me, the four gospels are all equally communist. I’m a Marxist who believes in God, follows Christ, and is a revolutionary for the sake of his kingdom.

Thirty – five years later, he was granted absolution from ‘all canonical censorships’ by Pope Francis.

Ernesto Cardenal was above all a poet from birth: his religious and political involvement came in later life. According to Nicaraguan writer Sergio Ramirez, ‘everything mergers and condenses in Cardenal’s poetry’ combining ‘the themes of love and longing, science, evolution and politics and the origins of the universe.’

His poem ‘Stardust,’ a meditation on death published in 2009, epitomises his vision:

And the galaxy was taking the shape of a flower

the way it looks now on a starry night.

Our flesh and our bones come from other stars

and perhaps even from other galaxies,

and after death we will help to form other stars

However, he remained committed to Marxist ideals.